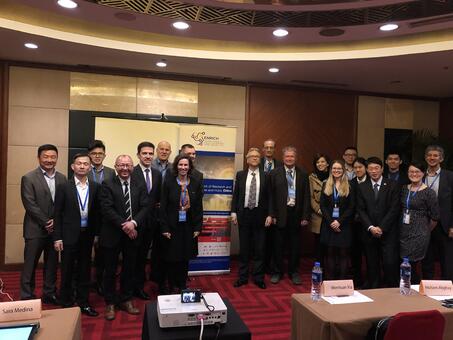 The most recent ENRICH in China Matchmaking Tour ended on Saturday, April 13th.

The Tour, that was very successful, lasted four days and brought to China a Delegation of 18 European organisations from different EU Member States and Associated Countries. The participants attended multi-sessions and visited Science Parks and Research facilities in Beijing and Wuxi, and had fruitful discussions with relevant Chinese counterparts from the Healthcare sector.

On April 10th, the tour started and the participants had the chance to attend Nordic Edge China Summit and had a workshop on China International Smart Healthcare Solutions, where they were able to better understand how the Chinese Healthcare works and engage in B2B sessions. In these events, speakers from the European Chamber of Commerce in China, IPR-Help Desk and other leading Chinese healthcare organisations shared their knowledge and expertise.

On the third day of the mission the kick off was in the Taihu Mashan Life Science and Healthcare Forum, with 2000 participants. Later, ENRICH in China continued visits in Wuxi, at Wuxi Boya Stem Cells Technology and Fresenius Kabi Huanui Pharmaceutical. During this day, the delegation was accompanied by Mr. Günther Marten, Minister Counsellor and IP expert EU Delegation to China.

On April 13th, the last day of the Tour, a Sino-European Healthcare Cooperation Workshop was organized, with very fruitful discussions among the European and Chinese stakeholders. Representatives from SENET (Sino-European Health Networking Hub, H2020 project) participated as well (attached a booklet printed on all activities and relevant organisations in Wuxi).